Today’s patch brings us a new warzone, new cartel market items, and a bunch of special Life Day items including a tinsel bomb and holo tree! Full details after the jump…

END_OF_DOCUMENT_TOKEN_TO_BE_REPLACED

Dear Friends and Regular Readers of the Blog–

By the fact that I’ve posted once update, this week, over the entire month of September, you already knew something was up.

And that something is: I’m not really playing SWTOR at the moment.

There are a variety of reasons, including guild implosions, friends who’ve stopped playing, and RL not giving me much time to do anything let alone play SWTOR and blog and podcast about it.

Thus, it’s time for me to take a break. I just gave a heads up to listeners who joined us live for recording this week’s podcast (which will be up on the site in a few days) that this is my last one for a while. So that makes it official.

I’ve had an amazing time being part of such a vibrant and engaged fan community. I appreciate all the access and information the SWTOR community managers have given little ‘ol me. But most of all I’ve enjoyed debating the finer points of this game with all of you. It’s meant a lot.

This domain is paid up for some time, so if I pick the game back up, you may see some new posts here. So we won’t say this is goodbye, just so long for now.

P.S. I’ll still be up to no good on twitter, so be sure to follow @anexxia there.

That’s because with less than a day’s notice, SWTOR did another server consolidation, moving all the origina server folks to a new server, but in some cases, additionally moving destination servers from the round 1 consolidation to a new server as well.

The 3 that specifically affected me were:

Wait, no I’m wrong I also have characters consolidated over onto The Harbinger too, from Space Slug…

I had an OK time of it in that I didn’t lose any of my level 47+ names. I lost a number of my placeholder names, and on Jedi Covenant, I now have 3 characters with the same name times 3 if I recall, which means having to figure out a slew of new names, or, more likely just deleting some of those alts after checking their bags for shiny crafted gear made by Anexxia.

I still need to log in and actually rechoose my legacy name and clean things up. It was just too overwhelming last night, after seeing all the characters crammed together on Canderous Ordo, to get it together and sort it all out.

I’m hoping that now that we went through this additional consolidation, paid server transfers will be on the horizon so I can finally do my own reunification and consolidation and no longer have my favorite character on a PvP server as I am just not feeling that environment.

I expected to be doing my own write-up of the race today, but that is not to be. You see, dear reader, I was out on vacation all of last week, with my game playing time during the Race being limited to Sunday. And although I logged in on Sunday morning, raring to go, I did not end up making it through much of the Race, which was very disappointing, especially considering that I spent several hours working at it.

Here were a few things that tripped me up:

And this is why despite having sunk a few hours into it, I logged out yesterday afternoon, without having completed the Race. And I’ll admit it: I was bummed out about it. I’m not a quitter. Or a slacker. But at the end of the day, I play these games to have fun. And this event just…wasn’t fun for me.

Was it just me? Was this some sort of post-vacation inability to get back into the swing of the game?

Let me know your thoughts on the event in the comments!

Oh my. I think I see an opportunity to make a few credits in my new future…

I’m headed out now to meet with the Chevin Conglomerate Grand Acquisition Race representative at the Nar Shadda Promenade. If you don’t hear from me in a few hours, send out the Empire bloodhound droids.

When Master Yuon introduced us, I gave you the benefit of the doubt. After all, she seemed to think you were a loyal valuable ally, who was interested in supporting our cause.

After you lost all of your points, and dishonored yourself in the eyes of the Scorekeeper, even then I had faith in your support and perseverance, and considered you to be a valued member of my crew, and even a friend.  After all, me beloved Master Yuon thought so highly of you, and entrusted me to you in her time of sickness. And thus I took your surly attitude and constant complaining with a grain of salt. Even my cousin Anexxia’s warnings about the true nature of Trandoshans didn’t sway me in my support of you — I just took it as more dark side tainted villainy.

But then we traveled to Voss, and everything changed. It was like you lost your mojo. Despite complaining often about “weak opponents” that were unworthy of your time and attention, I found myself having to revive you, often. Time and time again, I turned down armoring that could have helped me bolster my own defenses to take upgraded gear for you, in the hopes it would help you sustain our tougher battles. But it was not to be.

After our third setback in as many days, which required us to have to backtrack through the entire dark heart to re-engage with a strong foe, who once again bested you, I could see the writing on the wall: our time together had to come to an end in order for me to fulfill my destiny.

I’m reassigning you to the ship, on holocomm duty. And effective immediately, Tharan shall accompany me on all off-ship excursions. I’m sorry that it had to come to this, but you have become somewhat of a liability.

Today’s the big day — the server transfer loyalty rewards are popping up in the mail. For each of your eligible characters, you’ll have an in game mail with a lockbox that contains this adorable Gannifari pet and 25 Black Hole commendations.

There is one small catch however– you must be level 20 to unlock the box and claim your rewards. So start leveling those baby alts you transferred!

Another Tuesday and another set of patch notes!

I am happy to see this. I was so disappointed when I realized I couldn’t access the ship droid crafting upgrades, thanks to having leveled legacy on 3 servers instead of just one. Now to tally up how much I want to spend on Legacy perks…

Full patch notes after the jump!

END_OF_DOCUMENT_TOKEN_TO_BE_REPLACED 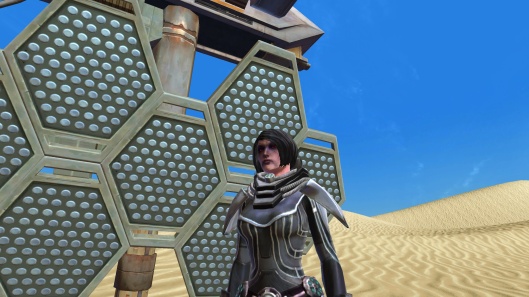 Believe it or not it’s been a year since I opened the doors here at Inquisitor’s Roadhouse to share my adventures in the world of Star Wars: the Old Republic.

The past 12 months have seen us feverishly anticipating the launch of the game, then going through 8 months of ups and downs and the game — and its players– got their footing, moving from subscription only to announcing a free-to-play option.

Over the past year, I’ve written a couple of posts that have gotten a lot of attention from my fellow players, most notably:

I think that thus far, however, my favorite post was this interview:

I’ve also given myself the giggles a number of times reading over the list of amusing guild names in my collection of clever guild names post.

As a direct result of all the fun I’ve had writing about my adventures in SWTOR, I joined the TOR Reporter podcast at the end of last year as a co-host, giving me even more opportunities to talk with other SWTOR enthusiasts. It’s been an amazing ride thus far, and I hope the next year brings even more interesting adventures to share with you…

P.S. This also marks my 101st post on the blog! Not bad for only one year… 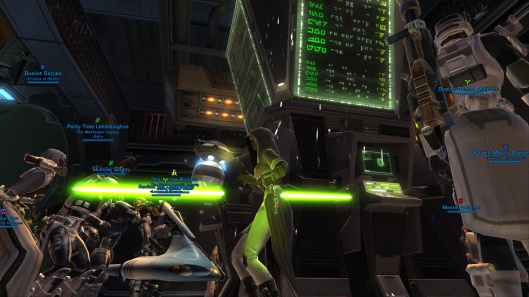 In case you haven’t been keeping up with the gaming sites today, the big SWTOR News is the announcement of a free-to-play game option starting this Fall. And all around the twittersphere and blogosphere 800,000 or so subscribers cried out: Noooooooooooooooooooooo! Or did they?

Starting this fall, there will be two different ways to play Star Wars: The Old Republic:

For additional context, and in light of the 300k plus subscriber decline last quarter, today’s developer blog on this topic notes:

Since launch, our team has spent a lot of time trying to find new ways to be able to bring the Star Wars™: The Old Republic™ experience to as many potential players as possible. We quickly became aware that our subscription only model was a major barrier for a lot people who wanted to become part of The Old Republic universe. In fact, many players who have left the game said they would happily come back if they could play without the commitment of a monthly fee.

We feel that flexibility and choice in playing our game is important for all current and future players. For that reason, we began the exploration of expanding the game to include a Free-to-Play option.

The free-to-play option also introduces a new currency, Cartel Coins, used with the microtransactions vendor, that will be used to purchase convenience items, boosts, visually unique gear, collectibles, and more. Like this Kowakian Monkey Lizard mini pet. And starting today, subscribers will be earning rewards as part of anew rewards program:

Although the coverage has stated that there will still be a subscription option with full access to everything, that’s may not exactly the case if you read the Subscription versus Free-to-Play comparison chart:

Galactic Trade Network
Subscribers can post up to 50 auctions for sale.

>What remains to be seen is if that is a reference to the existing 50 auctions per character limit that is in place on live servers, or if it is a per-account or per server restriction. Once I know for sure, I will update this post.

Now, those of you who don’t enjoy the GTN mini game as I do might think to yourself, so what? 50 is plenty! But here’s the deal: I have very frequently hit that 50 item # on one of my characters on one of my servers. And I play both side on three servers, and have a ton of crafters who peddle their wares on the GTN. That means I have, on occasion, had up to 75 auctions going at any given time.

UPDATE: I’ve gotten confirmation that it is indeed the same 50 GTN auctions per character limit we have in place now, not a new restriction. Huzzah! Color me happy as a clam!

Unlike certain other games that caused subscribers to have to deal with the in game currency as a condition of their subscription, it seems like it will on the whole be more or less business as usual for subscribers. Which is exactly how I’d like to see it. Because managing tokens for game play is not how I want to spend my MMO play time.

How does this news affect your SWTOR playing? Leave a comment and take part in the poll:

A few other blogosphere reactions to the SWTOR F2P news

P.S. Comments are screened so if you just post a “Free-to-play=SWTOR has failed” comment it’s not going to show up here.

P.P.S. I also highly encourage you to leave a voicemail at 616-666-6778 with your POV on these changes– we just might include it on the next Tor Reporter podcast.