One of the hardest things to do in any game — unless you are lucky enough to be part of a multi-game guild whose members’ interest in MMOs aligns with yours over time– is to find a guild that’s the right fit. But that’s where this guide comes in.

Before launch, it was, in theory, pretty easy to find a guild thanks to the guild recruitment functionality on the SWTOR website. With that handy tool removed, it is a little more arduous a task to find a guild that’s a good fit, but it truly can be done. Though it may take some trial and error– including joining a few guilds that turn out to be duds.

So, how do folks find guilds? A few of the more common methods include:

At this point in my gaming life, I’ve pretty much done all of the above, EXCEPT for joining a guild that was advertising in chat for members. Call me old fashioned, but I would like to think I’m joining a guild that is more discriminating about creating a positive and collegial guild culture than by inviting all comers via a mass chat channel.

Before you jump in and start applying, make sure you know what you are looking for!

Before you start checking out guild recruitment posts, however, I think it’s a good idea to take a few minutes to think through what you are looking for in a guild. When I sit and think through the most important qualities I look for in a guild, a few of the top things that come to mind are:

So now that you’ve made your list, get out there and start hunting for your ideal guild! And let me know in the poll and the comments how you found your guild.

Today’s poll inspired entirely by yesterday’s post on how to find a SWTOR guild. This one is a multiple-selection, to reflect that fact that I think many folks are going to be hedging their bets and indulging their altaholism by having a number of guild affiliations, and playing both sides of the fence. 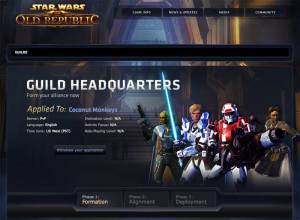 Editor’s NOTE: This post is from August 2011 and thus is outdated, as the Official Community site’s guild forums closed down in mid January. Stay tuned for an updated set of resources!

Even though Star Wars: The Old Republic (SWTOR) lacks a publicly known release date, folks are already starting to feel like they want to get the age-old top MMO to-do item out-of-the-way: finding the guild they’ll start the game with.

If you’re not lucky enough to have a solid group of MMO-playing friends who are planning to start a SWTOR guild, there are still a number of ways to find a guild.

Start with the Official Community Site

As of this morning, the official community site’s guild search utility found over 30,000 results when searching for an Empire guild, and over 24,000 Republic guilds. The tool allows you to search by affiliation (Republic or Empire), or by primary activity focus (PvP, PvE, RP.) Many guilds already have some public forum chit chat going, which gives you a taste for what their culture may be like. Other have already started recruitment threads in the Guild Hall forum to give prospective applicants a better idea of what they’re looking for.

Once you find a guild that look appealing, just hit the “Apply to this guild” button, and you’re set. Now your guild homepage will show that you’ve applied to the guild. Should you have clickers remorse you can easily hit the “withdraw your application” button, and start over again. Kudos for EA/bioware for allowing the guild formation process to start ahead of the live date.

My only complaint (and it’s a small one) is that the guild application process is not customized. There is a big “apply” button on each guild’s primary page, and hitting it submits your application to the guild owner for approval. [NOTE: as Guld notes in the comments, in your account settings you can fill out what amounts to an application resume that is submitted to prospective guilds when you hit the “apply” button.]

Another way to find a guild is by checking out the many SWTOR community sites, and the gaming publications that are already covering the game. Many of these sites have some sort of guild classified or guild recruitment forums you can browse. Just a few of the ones I’ve seen include:

Put Your Social Networks to Work

Probably the best way to find a guild of like-minded people is simply to put it out there in your social media channels of choice that you are excited about playing SWTOR and see who responds.

Another easy way to get a pulse on interesting people you might want to be guilded with is to follow the #SWTOR tag on twitter, tumblr, or other social networks. In addition to a steady stream of news and blog post links, you are likely to see a number of guild promos as well.

If you have other ideas or resources for finding SWTOR guilds, let me know in the comments.